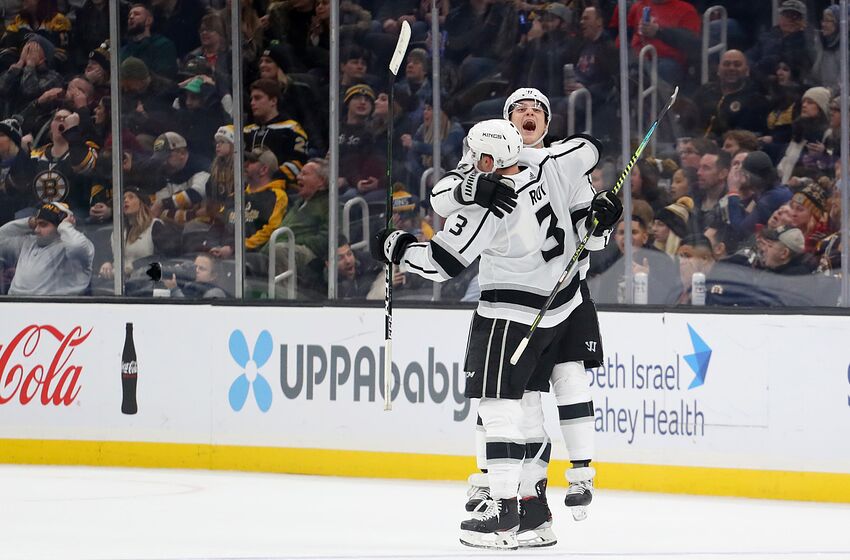 BOSTON, MASSACHUSETTS - DECEMBER 17: Matt Roy #3 of the Los Angeles Kings celebrates with Nikolai Prokhorkin #74 after scoring a goal against the Boston Bruins during the third period at TD Garden on December 17, 2019 in Boston, Massachusetts. (Photo by Maddie Meyer/Getty Images)

December is over and the world is welcoming a new decade and the Los Angeles Kings are hoping that the new decade can bring new results.

The Los Angeles Kings rang in the new year by catching the Philadelphia Flyers by surprise and putting five goals in the net, including four in the first period their biggest goal-scoring output in over a month of play.

The win closed out an up and down month for the Kings that started with four straight losses. The Kings then proved resilient by getting points in six straight games that included a 3-1-2 road trip.

With the win against Philadelphia, the Kings start the new year with a chance to make a climb up the points standings as they start with three more games at home before going back on the road for five.

Before moving on to January let’s look back at the Los Angeles Kings’ December by the numbers.

Tyler Toffoli‘s offensive game woke up in the month of December as he scored five goals and had 11 points to lead the Kings in both categories for the month.

Tyler Toffoli proving every angle is a good angle 😍 pic.twitter.com/SK2X9gRHcR

The output also represented almost half his output for both stats on the season. Toffoli has been much maligned for failing to live up to expectations after extending his contract with the Kings a few summers ago.

As Toffoli’s game continues to rise he will be subject to trade rumors, but for now, the Kings should relish current success.

When the Kings called up Marting Frk, a role player that has played most of his professional career in the minor league AHL, they did it for forward depth. The Kings have been without Trevor Lewis since December 21st due to injury and have been without Dustin Brown due to an illness as of late.

Frk came up and made an immediate impact, scoring two goals in an overtime win against the San Jose Sharks and then in the game against the Flyers scored again. It is doubtful Frk can maintain his goal a game output but his production does show the front office can find depth when looking to round out the roster.

If anything every goal gives fans and media plenty of humorous puns.

Jonathan Quick is not the same Quick of old but those looking to bury his NHL career as a credible starter in the NHL might have to hold for the moment. After starting the season with a 3.20 GAA and .887 save percentage Quick turned things around in December, posting a 2.49 GAA and a .914 save percentage.

While Quick has started twice as many games than his backup Jack Campbell (28>14) they both have similar numbers on the year but Quick has given up more goals on the season due to his poor start.

Next: Top five Kings of the decade

In December, Quick did a better job of stopping them. How long Quick can sustain this recent run will depend if the Kings’ young defense continues to improve and if Quick can keep father time at bay.